The 2019 film from Walt Disney Animation Studios is, of course, Frozen 2, which really does not need any additional introduction. Instead, here is a brief personal anecdote. I remember seeing the first Frozen in theaters the day it came out, and at some point halfway through the movie, it dawned on me that what was unfolding on the screen was really something special. By the end of the first Frozen, I was convinced that I had to somehow get myself a job at Disney Animation some day. Six years later, here we are, with Frozen 2’s release imminent, and here I am at Disney Animation. Frozen 2 is my fourth credit at Disney Animation, but somehow seeing my name in the credits at the wrap party for this film was even more surreal than seeing my name in the credits on my first film. Working with everyone on Frozen 2 was an enormous privilege and thrill; I’m incredibly proud of the work we have done on this film!

Under team lead Dan Teece’s leadership, for Frozen 2 we pushed Disney’s Hyperion Renderer the hardest and furthest yet to date, and I think the result really shows in the final film. Frozen 2 is stunningly beautiful to look at it; seeing it for the first time in its completed form was a humbling experience, since there were many moments where I realized I honestly had no idea how our artists had managed to push the renderer as far as they did. During the production of Frozen 2, we also welcomed three superstar rendering engineers to the rendering team: Mark Lee, Joe Schutte, and Wei-Feng Wayne Huang; their contributions to our team and to Frozen 2 simply cannot be overstated!

On Frozen 2, I got to play a part on several fun and interesting initiatives! Hyperion’s modern volume rendering system saw a number of major improvements and advancements for Frozen 2, mostly centered around rendering optically thin volumes. Hyperion’s modern volume rendering system is based on null-collision tracking theory [Kutz et al. 2017], which is exceptionally well suited for dense volumes dominated by high-order scattering (such as clouds and snow). However, as anyone with experience developing a volume rendering system knows, optically thin volumes (such as mist and fog) are a major weak point for null-collision techniques . Wayne was responsible for a number of major advancements that allowed us to efficiently render mist and fog on Frozen 2 using the modern volume rendering system, and Wayne was kind enough to allow me to play something of an advisory / consulting role on that project. Also, Frozen 2 is the first feature film on which we’ve deployed Hyperion’s path guiding implementation into production; this project was the result of some very tight collaboration between Disney Animation and Disney Research Studios. Last summer, I worked with Peter Kutz, our summer intern Laura Lediaev, and with Thomas Müller from ETH Zürich / Disney Research Studios to prototype an implementation of Practical Path Guiding [Müller et al. 2017] in Hyperion. Joe Schutte then took on the massive task (as one of his first tasks on the team, no less!) of turning the prototype into a production-quality feature, and Joe worked with Thomas to develop a number of improvements to the original paper [Müller 2019]. Finally, I worked on some lighting / shading improvements for Frozen 2, which included developing a new spot light implementation for theatrical lighting, and, with Matt Chiang and Brent Burley, a solution to the long-standing normal / bump mapped shadow terminator problem [Chiang et al. 2019]. We also benefited from more improvements in our denoising tech [Dahlberg et al. 2019] which arose as a joint effort between our own David Adler, ILM, Pixar and the Disney Research Studios rendering team.

I think Frozen projects provide an interesting window into how far rendering has progressed at Disney Animation over the past six years. We’ve basically had some Frozen project going on every few years, and each Frozen project upon completion has represented the most cutting edge rendering capabilities we’ve had at the time. The original Frozen in 2013 was the studio’s last project rendered using Renderman, and also the studio’s last project to not use path tracing. Frozen Fever in 2015, by contrast, was one of the first projects (alongside Big Hero 6) to use Hyperion and full path traced global illumination. The jump in visual quality between Frozen and Frozen Fever was enormous, especially considering that they were released only a year and a half apart. Olaf’s Frozen Adventure, which I’ve written about before, served as the testbed for a number of enormous changes and advancements that were made to Hyperion in preparation for Ralph Breaks the Internet. Frozen 2 represents the full extent of what Hyperion can do today, now that Hyperion is a production-hardened, mature renderer backed by a team that is now very experienced. The original Frozen looked decent when it first came out, but since it was the last non-path-traced film we made, it looked dated visually just a few years later. Comparing the original Frozen with Frozen 2 is like night and day; I’m very confident that Frozen 2 will still look visually stunning and hold up well long into the future. A great example is in all of the clothing in Frozen 2; when watching the film, take a close look at all of the embroidery on all of the garments. In the original Frozen, a lot of the embroidery work is displacement mapped or even just normal mapped, but in Frozen 2, all of the embroidery is painstakingly constructed from actual geometric curves [Liu et al. 2020], and as a result every bit of embroidery is rendered in incredible detail!

One particular thing in Frozen 2 that makes me especially happy is how all of the water looks in the film, and especially how the water looks in the dark seas sequence. On Moana, we really struggled with getting whitewater and foam to look appropriately bright and white. Since that bright white effect comes from high-order scattering in volumes and at the time we were still using our old volume rendering system that couldn’t handle high-order scattering well, the artists on Moana wound up having to rely on a lot of ingenious trickery to get whitewater and foam to look just okay. I think Moana is a staggeringly beautiful film, but if you know where to look, you may be able to tell that the foam looks just a tad bit off. On Frozen 2, however, we were able to do high-order scattering, and as a result, all of the whitewater and foam in the dark seas sequence looks just absolutely amazing. No spoilers, but all I’ll say is that there’s another part in the movie that isn’t in any trailer where my jaw was just on the floor in terms of water rendering; you’ll know it when you see it. A similar effect has been done before in a previous CG Disney Animation movie, but the effect in Frozen 2 is on a far grander, far more impressive, far more amazing scale [Tollec et al. 2020].

In addition to the rendering tech advancements we made on Frozen 2, there are a bunch of other cool technical initiatives that I’d recommend reading about! Each of our films has its own distinct world and look, and the style requirements on Frozen 2 often required really cool close collaborations between the lighting and look departments and the rendering team; the “Show Yourself” sequence near the end of the film was a great example of the amazing work these collaborations can produce [Sathe et al. 2020]. Frozen 2 had a lot of characters that were actually complex effects, such as the Wind Spirit [Black et al. 2020] and the Nokk water horse [Hutchins et al. 2020]; these characters required tight collaborations between a whole swath of departments ranging from animation to simulation to look to effects to lighting. Even the forest setting of the film required new tech advancements; we’ve made plenty of forests before, but integrating huge-scale effects into the forest resulted in some cool new workflows and techniques [Joseph et al. 2020].

To give a sense of just how gorgeous Frozen 2 looks, below are some stills from the movie, in no particular order, 100% rendered using Hyperion. If you love seeing cutting edge rendering in action, I strongly encourage going to see Frozen 2 on the biggest screen you can find! The film has wonderful songs, a fantastic story, and developed, complex, funny characters, and of course there is not a single frame in the movie that isn’t stunningly beautiful. 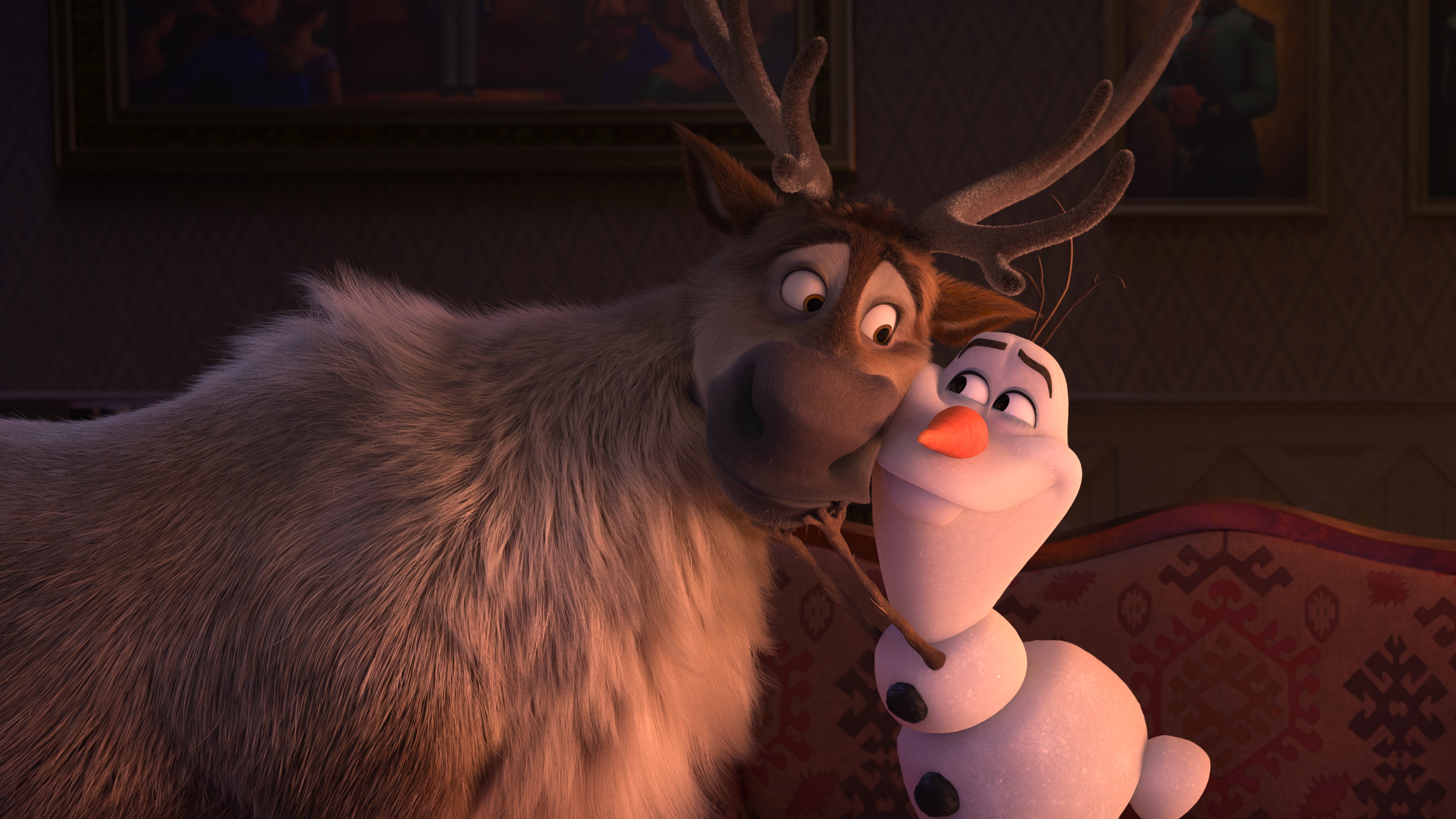 Here is the part of the credits with Disney Animation’s rendering team, kindly provided by Disney! I always encourage sitting through the credits for movies, since everyone in the credits put so much hard work and passion into what you see onscreen, but I especially recommend it for Frozen 2 since there’s also a great post-credits scene.