Over the past two years, the Hyperion team has publicly presented a number of major development efforts and research advancements. Many of these advancements were put into experimental use on Olaf’s Frozen Adventure last year, but Ralph Breaks the Internet is the first time we’ve put all of these new capabilities and features into full-scale production together. I was fortunate enough to be fairly deeply involved in several of these efforts (specifically, traversal improvements and volume rendering). One of my favorite things about working at Disney Animation is how production and technology partner together to make our films; we truly would not have been able to pull off any of Hyperion’s new advancements without production’s constant support and willingness to try new things in the name of advancing the artistry of our films.

When Ralph and Vanellope first enter the world of the internet, there are several establishing shots showing vast vistas of the enormous infinite metropolis that the film depicts the internet as. Early in production, some render tests of the internet metropolis proved to be extremely challenging due to the sheer amount of geometry in the scene. Although instancing was used extensively, the way the scenes had to be built in our production pipeline meant that Hyperion wasn’t able to leverage the instancing in the scene as efficiently as we would have liked. Additionally, the way the instance groups were structured made traversal in Hyperion less ideal than it could have been. After encountering smaller-scale versions of the same problems on Moana, Peter Kutz and I had arrived at an idea that we called “multiple entry points”, which basically lets Hyperion blur the lines between top and bottom level BVHs in a two-level BVH structure. By inserting mid-level nodes from bottom level BVHs in to the top-level BVH, Hyperion can produce a much more efficient top-level BVH, dramatically accelerating rendering of large instance groups and other difficult-to-split pieces of large geometry, such as groundplanes. This idea is very similar to BVH rebraiding [Benthin et al. 2017], but we arrived at our approach independently before the publication of BVH rebraiding. After initial testing on Olaf’s Frozen Adventure proved promising, we enabled multiple entry points by default for the entirety of Ralph Breaks the Internet. Additionally, Dan Teece developed a powerful automatic geometry de-duplication system, which allows Hyperion to reclaim large amounts of memory in cases where multiple instance groups are authored with separate copies of the same master geometry. Greg Nichols and I also developed a new multithreading strategy for handling Hyperion’s ultra-wide batched ray traversal, which significantly improved Hyperion’s multithreaded scalability during traversal to near-linear scaling with number of cores. All of these geometry and traversal improvements collectively meant that by the main production push for the show, render times for the large internet vista shots had dropped from being by far the highest in the show to being indistinguishable from any other normal shot. These improvements also proved to be timely, since the internet set was just the beginning of massive-scale geometry and instancing on Ralph Breaks the Internet; solving the render efficiency problems for the internet set also made other large-scale instancing sequences, such as the Ralphzilla battle [Byun et al. 2019] at the end of the film and the massive crowds [Richards et al. 2019] in the internet, easier to render.

Another major advancement we made on Ralph Breaks the Internet, in collaboration with Disney Research Zürich and our sister studio Pixar Animation Studios, is a new machine-learning based denoiser. To the best of my knowledge, Disney Animation was one of the first studios with a successful widescale deployment of a production denoiser on Big Hero 6. The Hyperion denoiser used from Big Hero 6 through Olaf’s Frozen Adventure is a hand-tuned denoiser based on and influenced by [Li et al. 2012] and [Rousselle et al. 2012], and has since been adopted by the Renderman team as the production denoiser that ships with Renderman today. Midway through production on Ralph Breaks the Internet, David Adler from the Hyperion team in collaboration with Fabrice Rousselle, Jan Novák, Gerhard Röthilin, and others from Disney Research Zürich were able to deploy a new, next-generation machine-learning based denoiser [Vogels et al. 2018] Developed primarily by Disney Research Zürich, the new machine-learning denoiser allowed us to cut render times by up to 75% in some cases. This example is yet another case of basic scientific research at Disney Research leading to unexpected but enormous benefits to production in all of the wider Walt Disney Company’s various animation studios!

In addition to everything above, many more smaller improvements were made in all areas of Hyperion for Ralph Breaks the Internet. Dan Teece developed a really cool “edge” shader module, which was used to create all of the silhouette edge glows in the internet world, and Dan also worked closely with FX artists to develop render-side support for various fracture and destruction workflows [Harrower et al. 2018]. Brent Burley developed several improvements to Hyperion’s depth of field support, including a realistic cat’s eye bokeh effect. Finally, as always, the production of Ralph Breaks the Internet has inspired many more future improvements to Hyperion that I can’t write about yet, since they haven’t been published yet.

The original Wreck-It Ralph is one of my favorite modern Disney movies, and I think Ralph Breaks the Internet more than lives up to the original. The film is smart and hilarious while maintaining the depth that made the first Wreck-It Ralph so good. Ralph and Vanellope are just as lovable as before and grow further as characters, and all of the new characters are really awesome (Shank and Yesss and the film’s take on the Disney princesses are particular favorites of mine). More importantly for a rendering blog though, the film is also just gorgeous to look at. With every film, the whole studio takes pride in pushing the envelope even further in terms of artistry, craftsmanship, and sheer visual beauty. The number of environments and settings in Ralph Breaks the Internet is enormous and highly varied; the internet is depicted as a massive city that pushed the limits on how much visual complexity we can render (and from our previous three feature films, we can already render an unbelievable amount!), old locations from the first Wreck-It Ralph are revisited with exponentially more visual detail and richness than before, and there’s even a full on musical number with theatrical lighting somewhere in there!

Below are some stills from the movie, in no particular order, 100% rendered using Hyperion. If you want to see more, or if you just want to see a really great movie, go see Ralph Breaks the Internet on the biggest screen you can find! There are a TON of easter eggs in the film to look out for, and I highly recommend sticking around after the credits for this one. 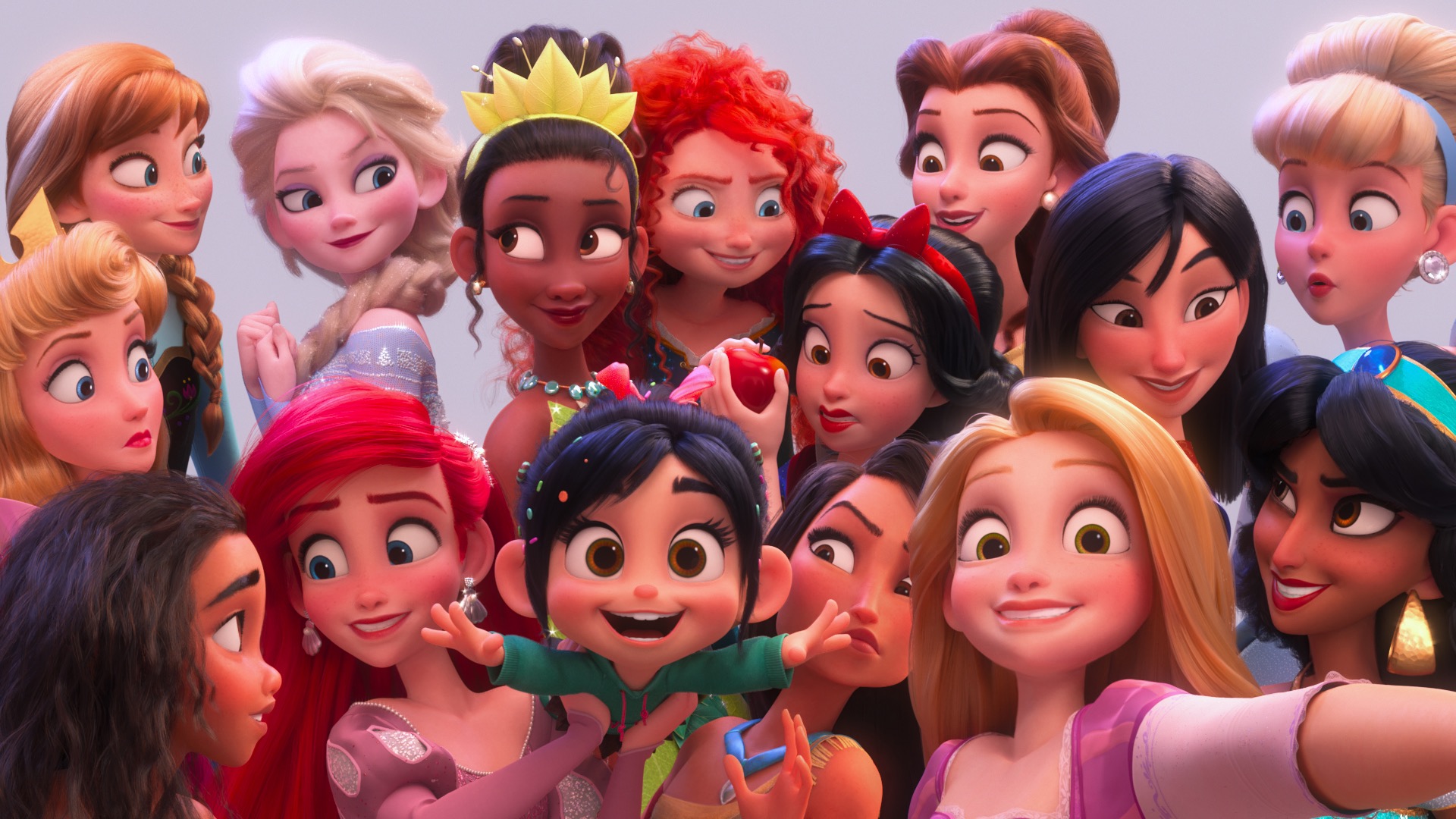 Brent Burley. Extending the Disney BRDF to a BSDF with Integrated Subsurface Scattering. 2015. In ACM SIGGRAPH 2015 Course Notes: Physically Based Shading in Theory and Practice.